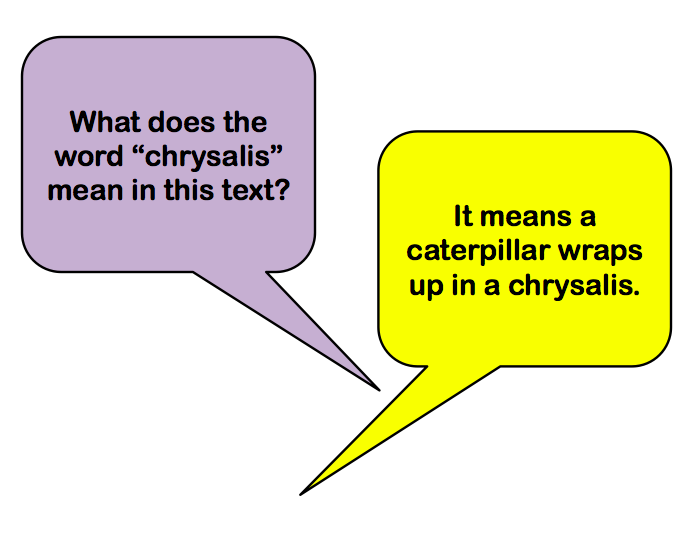 Sound familiar?  Students give an example or a description when you ask what a words mean.  Yeah, a chrysalis is a chrysalis that the butterfly wraps up in!  You know they have the right idea, but they can’t quite get it out.

Defining new vocabulary is something that can be difficult for elementary students. Often, instead of a definition we get a description or an example, as seen above. Much like my skill spotlight on retelling, this is a skill that seems easier than it actually is.

The standards call for special attention to Tier 2 words.  These are words that are used across content and topics and are generally not defined in context, making them both more usable in daily life, and harder to figure out.  (That’s a post for another day!)

Beginning in second grade though, the standards also call for students to be able to determine the meaning of Tier 3, or domain-specific, vocabulary words.

How do I pick books for tier three vocabulary practice?

If you’re starting to pick up a theme for this blog, you know that I’m going to say text selection matters.  Just handing students any old nonfiction text when they are struggling with defining tier three words isn’t nearly deliberate enough on our part.

How tier three words appear in the text makes a huge difference in the level of effort required to determine their meanings.

Here are some common scenarios in which tier three vocabulary appears, listed from easier scenarios to harder.

Definition appears in a text box on the same page that the word is found in context:The definition is stated explicitly, so students don’t have to infer what a word means from context.  For most students, this makes this a fairly easy scenario in which to define a new word.  (Keep in mind, though, that for students who tend to skip over text features, this would be a more difficult scenario).

Embedded definition in context with picture support:  While students still don’t have to infer a definition, typically these definitions are contained in clauses within a complex sentence.  Navigating this sentence structure can create more of a challenge, however, pictures that give a visual of the new word can compensate for this.

Definition can be inferred from context (no picture support):

Use of a glossary is necessary*:  In a big ol’ pile of nonfiction ranging from first to fifth grade levels, I couldn’t find an example of a tier three word that could ONLY be defined using the glossary.  I did find, though, that some tier two words fit this scenario.  This is tough because readers have to realize a word is new to them, check for clues on the page where the word is located, then check for a glossary.

What are your best tips for helping students with new vocabulary in nonfiction text? Leave them in the comments!